Since April 2019, an industrial battery storage system has been regulating peak loads in the power grid of the Swiss municipality of Maienfeld. Simultaneously, it is used to provide ancillary services. The initial experience in live operation has been positive. And that’s not all: The two fields of application supplement each other perfectly.

Teething troubles, minor defects, learning processes. As a rule, they accompany every new system during its deployment, even AG EW Maienfeld’s new battery storage system, which Alpiq operates. Above all, however, the first two months revealed one thing: The combination of two different application fields is promising and holds potential for the future.

The battery storage system has a capacity of 1.25 MWh and reduces costly peak loads in the power grid of Maienfeld’s power utility. At the same time, the battery storage system provides ancillary services. It is the first battery storage system in Switzerland to have been pre-qualified by Swissgrid for supplying secondary control power. The battery is controlled via Alpiq’s digital platform and deployed to maximise the system’s profitability. “This is the first time such a solution has been implemented in Switzerland and it is the basis for the profitable operation of the battery,” says Thomas Stadler, Head of Digital Energy Solutions at Alpiq. He adds that the applications are to be expanded with a third field in autumn 2019. “We are seeking pre-qualification for the provision of primary control power.” Even with just the existing two fields of application, the battery storage system is ideally equipped for today’s energy world, which is characterised by digitalisation and decentralisation. Thomas Stadler is excited: “The planned participation in the market for primary control power will put the icing on the cake.”

Due to the period of test operation and the pre-qualification procedure during the first two months of operation, the battery storage system has until now smoothed virtually no peak loads in Maienfeld’s power grid. The highlight of the initial operating phase was Swissgrid’s certification for the successful pre-qualification for the provision of secondary control power. “The initial experience with Alpiq’s digital platform has also proved to be very valuable," says Roger Burkhart, Project Manager for Storage Solutions at Alpiq. The platform is connected to the battery storage system and plays an important role in the overall solution. It uses vast amounts of data and applies artificial intelligence to continuously calculate the economically optimal field of application for the battery storage system. The integration into Alpiq’s power plant pool opens up interesting opportunities on the ancillary service market.

It comes as no surprise that the system has already sparked interest after only two months in operation. The combination of two fields of application and the connection to the digital platform make this solution unique. “We are proud to be able to offer this unique selling point and will in all likelihood be able to implement a second similar project this autumn,” says Thomas Stadler. Reviewing the first two months, he underlines the useful insights that were gained about the power grid in Maienfeld. These analyses enabled the platform’s algorithms to be trained and optimised for future applications. Among other things, the successful operation of the system is attributable to the good cooperation between the partners. Alpiq was involved from the outset, also during the test phase, which is now proving beneficial. “We are very confident that we will be able to apply the battery storage system to intelligently manage the Maienfeld power grid,” Thomas Stadler says. The conditions are promising for the combined business model to be mutually beneficial. 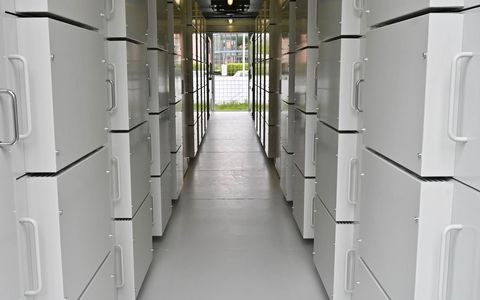