Travelling remains difficult at the moment, especially if you want to cross your country’s borders. Throughout summer, we will be offering you a breath of fresh air as we take you on a journey of discovery through regions that are home to the facilities owned by Alpiq or in which we have a stake. And perhaps you will want to discover these places for yourself on your next trip? 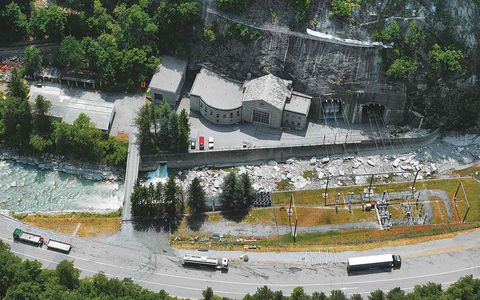 On the southern slopes of the Pennine Alps, which are actually closer to Italy than they are to the rest of Switzerland, the Simplon Electrical Power (EES) installations include three power stations – Gondo, Tannuwald and Gabi – as well as three dams – Fah, Eggen and Sera. A development that plays an important economic role for this remote region, where the force of nature is ever present, as Fabien Monthoux, Office Business Partner at the Hydro Power Generation facility can testify.

“Of all the Alpiq employees, we are the privileged few who have come to the South Simplon region, situated midway between Brig and Domodossola. When we return to the office, we like to talk about our special attachment to this region and it makes our colleagues smile.

The landscapes are at times open and welcoming, at other times tortuous and harsh, but always imbued with a rich and often dramatic history. During the warm season, flash flooding caused by melting glaciers and violent thunderstorms are not uncommon, turning the Gondo Gorge into a bathtub, not to mention the landslides and of course the Simplon fault. During winter, snow storms sheer off your flesh, while avalanches frequently bury the Zwischbergental. It is in this harsh context that the South Simplon region is to be discovered: