Finhaut – After 14 years of work and intensive testing, the Nant de Drance pumped storage power plant in Valais will be put into operation on 1 July 2022. Thanks to its six extremely flexible machines and a power capacity of 900 MW, Nant de Drance power plant is set to play a key role in the stabilisation of the Swiss and European electricity grids. It will also contribute towards the security of supply of electricity in Switzerland. Today, Federal Councillor Simonetta Sommaruga and the President of the Cantonal Council of Valais, Roberto Schmidt, inspected the power plant on the occasion of its upcoming commissioning. Nant de Drance SA and its shareholders Alpiq, SFR , IWB and FMV will inaugurate the power plant in September. The general public will have the opportunity to explore the plant during open door events on Saturday 10 and Sunday 11 September 2022. 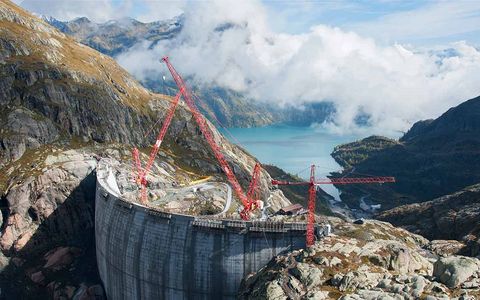 Fourteen years after the start of construction work, the Nant de Drance pumped storage power plant will be put into operation on 1 July 2022. Federal Councillor Simonetta Sommaruga and the President of the Cantonal Council of the Valais, Roberto Schmidt, today took the opportunity to visit the power plant and get a first-hand impression. Located 600 m below ground in a cavern between the Emosson and Vieux Emosson reservoirs in the Finhaut municipality of Valais, the Nant de Drance power plant will feature six pump turbines with a capacity of 150 MW each. The highly flexible machines make it possible to switch from pumping at full power to turbining at full power in less than five minutes, i.e. from -900 MW to +900 MW. The volume of water passing through the Nant de Drance turbines, 360 m3 a second, corresponds to the flow of the Rhône at Geneva in summer. The upper reservoir of Vieux Emosson holds 25 million m3 of water, which represents a storage capacity of 20 million kWh. These characteristics allow Nant de Drance to play a crucial role in stabilising the electric grid.
In face of the growth of new renewable energies such as wind and photovoltaic whose production is intermittent, this flexibility is required to compensate for the fluctuations on the electric grid and maintain continual equilibrium between production and electricity consumption. Nant de Drance works like a gigantic battery which allows excess electricity to be stored in a short term or to produce the necessary energy when demand exceeds production.

The construction of the Nant de Drance pumped storage power plant has involved some extraordinary work. Reminiscent of the great era of dams in the middle of the last century, the construction site required the controlled deployment of extraordinary resources from a human, financial and technological point of view. At the peak of construction, up to 650 workers worked on the construction site and some 60 companies came together to realise this structure in the Alps at a cost of around 2 billion Swiss francs. Situated at the heart of the mountain, the power house cavern measuring 194 m long, 52 m high and 32 m wide required the excavation of 400,000 m3 of rock and the drilling of 17 km of tunnels. The Vieux Emosson dam located at 2,200 m altitude was raised by 21.5 m in order to double the capacity of the reservoir and thus provide adequate storage capacity for the facility. The plant’s six pump turbines are at the cutting edge of hydroelectric technology. The speed of the machines can vary in both pump and turbine mode, thus allowing the power plant to operate as close to its optimum efficiency as possible by adapting to the slightest fluctuations in the electricity market.

In order to minimise its environmental impact, Nant de Drance worked closely with environmental organisations right from the earliest stages of the project. Fourteen projects at a total cost of twenty-two million Swiss francs have been, are or will soon be completed to offset the environmental impact of the construction of the pumped storage power plant and the very high-voltage line connecting it to the power grid.
Most of the measures aim to recreate specific biotopes locally, especially wetlands, in order to encourage recolonisation of the area by certain rare or endangered animal and plant species in Switzerland.

Nant de Drance SA and its stakeholders Alpiq, SFR, IWB and FMV will open the power plant in September 2022. The festivities will be dedicated to today’s youth, future generations and the future of energy. Students from the Trient Valley will have the opportunity to discover this hydropower complex, which is set to contribute to the future of the energy system, and will also get the chance to participate in the festivities. The general public is invited to come and explore the power plant during open day events.

Open days – Saturday 10 and Sunday 11 September 2022
Nant de Drance is to open its doors to the general public during its inauguration. For security reasons, the number of spaces is limited and registration for the open day events is mandatory. Registration is now open online at https://ndd-portesouvertes.ch

A catering area is available at Le Châtelard throughout the weekend.