Hydrogen is seen as a beacon of hope in the transformation of the energy system towards a climate-friendly energy supply. And things are moving forward, as the inauguration of the first hydrogen filling station in Eastern Switzerland in St.Gallen at the beginning of July shows. Right in the middle of it all: green hydrogen produced by Hydrospider (a joint venture of Alpiq, H2 Energy and Linde/PanGas) in Gösgen – the same place where research into hydrogen technology was conducted back in the 1990s.

Contribute to the development of new technologies – this was the basic idea behind the construction of a test facility for fuel cells and hydrogen in Niedergösgen (Canton Solothurn) in 1990. Aare-Tessin Ltd. for Electricity (Atel), a predecessor of Alpiq, was behind the idea. Beat Galli, a specialist technician at the Gösgen hydroelectric power plant, was involved from the very beginning. “My job was to operate the hydrogen plant and to support the tests. We were the very first in Switzerland to operate a grid-connected fuel cell,” he explains. The experiments in Niedergösgen were carried out by students from the Swiss Federal Institute of Technology (ETH) and universities. “The interest in the system was immense; we had visitors from all around the globe,” Beat Galli recalls.

For the for the hydrogen production, the prototype of a membrane electrolysis system was used and modified in cooperation with the Paul Scherrer Institute. Atel procured two fuel cell systems from the Canadian company Ballard to produce electricity from hydrogen. It was the first time that hydrogen/air membrane cells were used in Europe. At that time there was very little experience worldwide with solid polymer fuel cells in grid-connected applications. Atel therefore decided to test this type in the pilot facility. The two cells were in operation for around three years from the end of 1991. The project allowed Atel and manufacturers of electrolysers and fuel cells to gain valuable insights, as did various researchers with their experiments. Ever since the tests were completed, Beat Galli has been working at the hydropower plant again. Personally, he regrets that the test facility was shut down. At the same time, however, he is convinced that hydrogen will play an important role in the future. In any case, the time for hydrogen now looks set to be ripe. 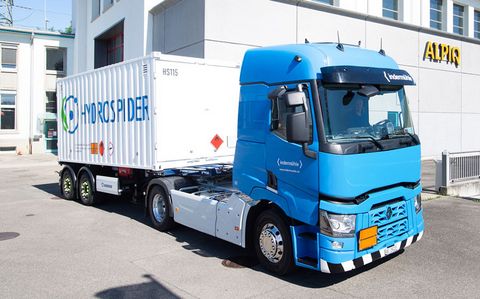 Hydrogen is an optimal alternative to fossil fuels, such as petrol and diesel, and contributes to the decarbonisation of road transport and of the heavy industry. Provided that the energy-intensive electrolysis is carried out using carbon-neutral, renewable electricity. 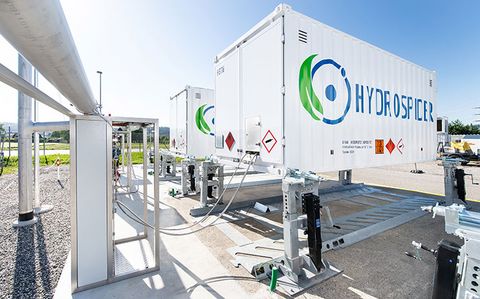 The green hydrogen ecosystem has been launched

Hydrospider has commissioned its first electrolysis plant at the Alpiq hydroelectric power station in Gösgen. At the beginning of June the first special container filled with green hydrogen was transported from Gösgen to St.Gallen.