Lausanne – At the end of August 2022, a group of opponents of the Bel Coster wind farm in the canton of Vaud’s Jura-Nord district submitted a new appeal with the Federal Supreme Court against the construction of the wind farm. This will result in a further delay in the realisation of the nine-turbine wind farm. The annual electricity production is expected to range between 65 and 90 GWh, most of which will be generated during the critical winter months.

Alpiq regrets that another appeal has been submitted against the construction of the Bel Coster wind farm. The appeal will lead to a series of legal proceedings and further delay the realisation of the wind farm. The annual production range of between 65 and 90 GWh will depend on the type of wind turbine deployed. This corresponds to the electricity consumption of some 22,000 households and represents an indispensable contribution to securing the supply of green energy for the canton of Vaud, in particular during the winter. In view of the current energy situation and the renewable energy goals pursued by the federal and cantonal governments, Alpiq does not consider such a delay to be expedient.

In spring 2022, the Vaud Cantonal Court dismissed all appeals submitted by opponents of the Bel Coster wind farm. The court recognised the national interest in view of the expansion targets for renewable energy in Switzerland and in the cantons. Moreover, in the court’s view, effects on other areas such as wildlife, forest, water bodies and the landscape are permissible in view of the envisaged compensatory measures. While the environmental associations withdrew their objections following the decision of the Vaud Cantonal Court, a small group of opponents, amongst them the Helvetia Nostra Foundation, submitted a new appeal with the Federal Supreme Court on 30 August 2022.

According to a study published by the Swiss Federal Office of Energy (SFOE) in August 2022, the current potential of wind energy in Switzerland amounts to 29.5 TWh a year. 19 TWh of this could be generated during the winter months, precisely when Switzerland most urgently needs the energy. According to the SFOE, approximately 8.9 TWh of electricity could be generated by exploiting just 30% of this potential. This corresponds to roughly 1000 wind turbines, to which Bel Coster would make a significant contribution. 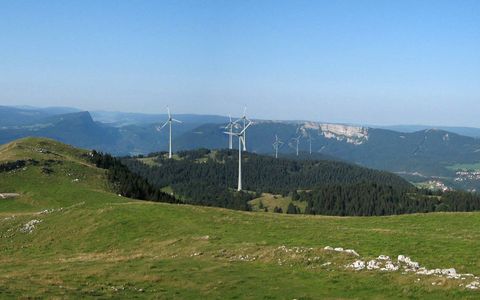