Lausanne – The Alpiq Group (Alpiq) generated net revenue of CHF 7.7 billion in 2021 despite an extremely dynamic market environment. The revenue growth was mainly attributable to the large increase in energy prices in the second half of the year. Operating business was up on the previous year, resulting in EBITDA before exceptional items of CHF 302 million. One of the main drivers of this positive result was energy trading with a contribution of CHF 258 million, as Alpiq could make optimum use of the flexibility of the production plants in the dynamic market environment. As expected, Swiss power production was significantly below the previous-year period because the unplanned extension of the overhaul of the Leibstadt nuclear power plant caused Group earnings to decrease by CHF 62 million. By contrast, international power production exceeded the previous-year result. The high prices on the energy markets in the past few months also impacted the hedging transactions relating to Alpiq’s own power production and power purchase agreements. Financial hedges have to be measured at the reporting date, although market-related increases in the value of the hedged production and power purchase agreements cannot be recognised in accordance with IFRS regulations. These are not posted until the time of realisation and in this way compensate for the losses already recognised on hedges over time. Due to Alpiq’s long hedging horizon this can affect several subsequent financial years. Alpiq therefore reports a net income of CHF -271 million for 2021 pursuant to IFRS. This includes measurement-related adjustments to financial hedges of CHF -521 million, which will largely be offset in the next two years.

​Measures to cushion the dramatic increase in energy prices

The energy markets were thrown off balance in the second half of 2021, particularly towards the end of the year. Massive price hikes, especially for electricity and gas, increased the liquidity and credit risks faced by all market participants. Alpiq therefore introduced and implemented extensive measures at an early stage to increase short-term liquidity as a precautionary measure, both in the energy business and through agreements with banks for additional credit and guarantee lines. Alpiq’s shareholders provided temporary liquidity at short notice. This amounted to CHF 300 million at the end of January 2022. These measures considerably improved Alpiq’s scope of action and boosted its resilience to extreme market fluctuations.

The strong increase in energy prices led to a corresponding extension of the balance sheet. As a result, the equity ratio decreased from 51.0 % to 26.2 % in relation to total assets. Equity remained at CHF 3.6 billion at 31 December 2021 and is thus CHF 203 million below the previous year. Current and non-current financial liabilities came to CHF 1.6 billion at 31 December 2021. The CHF 361 million increase is mainly attributable to taking out short-term loans to increase cash and cash equivalents in light of the dynamic market environment. As a result, net debt increased to CHF 675 million. The gearing ratio net debt/EBITDA before exceptional items rose to 2.2. At the end of 2021, Alpiq’s liquidity came to around CHF 900 million (2020: CHF 1.0 billion).

The dynamic market environment offered Alpiq optimum conditions for energy trading in the past financial year. This is reflected in the very strong result. Alpiq was able to market its own power plants extremely profitably. The targeted expansion of Merchant Trading also made an impact. Alpiq was able to meet the strong demand for flexible power production effectively and successfully, and used the extreme volatility on the energy markets to its advantage.

Considered in isolation, Swiss production down, international production up

Power production in Switzerland did not match the previous-year level due to the announced loss of production capacity. This was attributable to the overhaul of the Leibstadt nuclear power plant. To replace the shortfall caused by the unplanned extension of the overhaul additional electricity had to be procured. The high market prices for the electricity procured in this way also had a negative impact on earnings. In Switzerland, Alpiq achieved good earnings in the hydropower area. Although production volumes were slightly lower than in the very strong previous year, they were still high at 4.2 TWh. Internationally, the power plants returned a good result. The gas-fired combined-cycle power plants, with their high electrical efficiency and flexibility, were the main beneficiaries of the dynamic market environment.

The Nant de Drance pumped storage power plant project has successfully completed the last test phase of technical commissioning. Alpiq holds a 39 % stake in Nant de Drance. The 900 MW plant will be commissioned for commercial use from mid-2022 and will make an important contribution to the security of supply in Switzerland and Europe from hydropower.

The Tormoseröd wind farm developed by Alpiq in southwestern Sweden is scheduled to become fully operational at the end of 2022. The wind farm with installed capacity of up to 72.6 MW is expected to cover the electricity consumption of 8,400 Swedish households using renewable energy.

In light of increasing electricity demand, particularly during the winter months and in connection with unexpected downtimes of power plants, Alpiq and partners have pushed forward new projects, for example in Zermatt, where up to 650 million kWh of additional winter time energy could be won with a new reservoir. Photovoltaics also enjoy upswing: In the Simplon region on the Italian border, Alpiq is planning Switzerland’s most important alpine photovoltaic plant together with partners. Thanks to its ideal location, “Gondosolar” could produce around 23.3 million kWh of environmentally-friendly electricity a year. What makes the project extraordinary is that the photovoltaic plant will produce the majority of its electricity during the winter months thanks to its exposed location. This effect is significantly enhanced by bi-facial (double-sided) modules, which can produce power from the reflection of the sunlight in the snow on both sides of the panel.

Alpiq continued to invest in the maintenance and modernisation of existing plants in Switzerland, for example, the complete refurbishment of the Hüscherabach small hydropower plant. Alpiq is a pioneer in the production of green hydrogen in Switzerland and continues to drive the expansion of capacities together with partners. By 2023, Alpiq plans to commission a plant that can produce 1,200 tons of green hydrogen a year and that feeds waste heat into the regional district heating grid. For Alpiq, green hydrogen is a strategically important component of renewable energies that contributes to the decarbonisation of the energy system. For this reason, Alpiq has further expanded its partner network for hydrogen mobility.

Board of Directors proposes no dividend distribution

The Board of Directors of Alpiq Holding Ltd. submits a proposal to the Annual General Meeting that no dividend be distributed for the 2021 financial year due to the negative earnings situation.

Alpiq is well positioned with its business model. The rising prices, which are hedged in advance, will have a positive effect on earnings. Due to the dynamic market development, Alpiq expects positive EBITDA before exceptional items at a level similar to the past two years for 2022.

From a current perspective, Alpiq expects positive net income (IFRS) for the 2022 financial year. The shift of earnings in the 2021 financial year and their negative accounting effects will have a delayed positive impact in subsequent years.

Under the new lead of CEO Antje Kanngiesser, CFO Luca Baroni and the Executive Board, Alpiq made targeted adjustments to its structures and processes in the 2021 financial year. Alpiq’s objective is to focus on its core business and to increase the value and profitability on its core markets. The Alpiq Group’s financial reporting will be adjusted accordingly for the publication of the Half-Year Results 2022 and will reflect the reorganisation of the business divisions as implemented in the internal reporting from 1 January 2022. 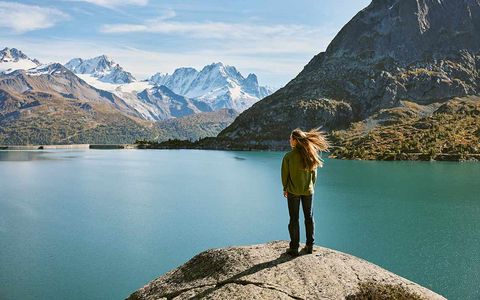